My child, don’t reject the Lord’s discipline,
and don’t be upset when he corrects you. Proverbs 3:11

Speed bumps are designed to slow the speed of traffic, usually in an area where there is a lot of pedestrian traffic, neighborhoods with small children, or other factors which call for a decreased rate of speed. They’re usually easily spotted, painted yellow and/or reflectively, and are very effective in slowing us down and making us more aware of our environment. They’re frustrating, yes, but are a necessary evil in a society filled with vehicles capable of high rates of speed and driven by inattentive drivers.

Occasionally, perhaps due to wear and tear, or perhaps in a design flaw, they aren’t easy to spot, blending in with the road surface to the extent that you don’t see them until you make bone jarring, teeth rattling contact with them. Those are the ones that are particularly frustrating, they ones you don’t see coming.

I hit a speed bump this week in my quest to become leaner and faster. I didn’t see it coming and was taken unaware.

Being an old broad who runs, it seems that something always hurts a little. But, typically, it’s a sore muscle or tired legs, nothing serious. Being an injury prone old broad who runs makes me err on the side of caution when I implement anything new in my training. I want to be that 93 year old woman who still signs up for races and always wins her age group (because nobody else her age is still alive and/or able to run-I’ll take a win any way I can get it). So, I take it cautiously. I try to never build distance and intensity at the same time, try to always abide by the “10% rule” when training, monitor my aches and pains with devoted intensity, and always run with a plan. Typically, when I have an injury, it’s my right IT band, which has been known to ping with annoyance when I turn over wrong in bed. But, this week, I hit one of those speed bumps that hides from you, one that springs up and knocks you flat when you least expect it. My back went out.

Now, I have occasional back pain. Like I said, I’m an old broad who runs. Stuff hurts. Usually, after a soak in a warm tub and a good night’s sleep, I’m good to go. So, Monday night, as I carefully laid out my gear for the next morning’s speed session, I ignored the pain in my lower back. I did a little easy stretching, set my alarm, and determined it would be better in the light of day.

Unfortunately, after a very uncomfortable night, morning arrived with no relief. In fact, I could barely move. I no longer resembled and old broad who runs, I was just an old broad.

I’ll admit that tears of frustration filled my eyes and burned my throat. I just started rebuilding my training, with an eye toward being a little bit faster. Just a little bit. I’m not expecting miracles. But, I would like to be faster. I have dreams and goals, just like all runners. And, suddenly, getting out of bed was a Herculean task. Sheesh! Give me a friggin’ break!

Now, if you’ll think back to Tuesday, you may remember the top news story of the day. A tornado did devastating damage to an area of our country, taking many lives, spreading destruction far and wide. As I steeped in self pity on my couch, sipping my coffee, I watched people whose lives had been destroyed, heroic teachers who placed their student’s lives above their own, and I got my perspective.  This was just a small setback, a speed bump reminder. I reached for my phone, called my chiropractor, and went about my day.

I love my chiropractor, Dr. Brian Page,  and have great faith in him, because he is an athlete, and he realizes the importance of getting me back to the sport I love. After 3 days of visits, mulitple ice/heat treatments and lots of easy stretching, I’m headed back. I’ve had to revamp my training schedule, but that’s a little thing and nothing new. I rode my bicycle on Friday morning, a slow, steady ride. It was painfully slow, but the breeze from the wings of the butterflies that kept passing me at least made it nice and cool. 🙂  Took the dog for a nice, slow walk today, and plan to test the waters a little in the morning with an easy run/walk. Still stretching and icing, and mostly taking it pretty easy.

No speedwork for me this week, indeed the act of moving from one room to another seems challenge enough. I’ll take it easy the next couple of weeks, build my mileage back up with easy walks and runs, then hit it hard again in about three weeks. The lesson? Pay attention to your body, don’t increase distance and intensity simultaneously, and remember I’m not a spring chicken any longer. Those speed bumps really hurt these days. 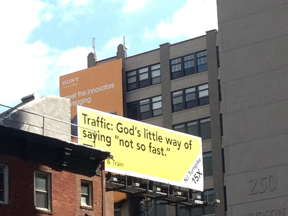 Billboard I saw on my runabout in NYC.

To learn, you must love discipline;
it is stupid to hate correction.
Proverbs 12:1